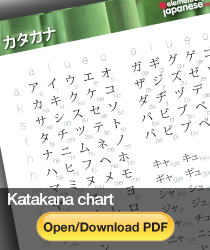 This one will be especially useful when you have learned Hiragana and Katakana but sometimes forget a character or two.

Katakana is one of the two Japanese syllabaries (or syllabic alphabets) that are used in Japanese, along with Kanji and a bit of Roman script. Each Katakana character has a Hiragana counterpart and the number of characters used is about equal (some exceptions occur, e.g., Katakana has some special characters for transcribing foreign names and words).

Usage of Katakana in Japanese

You will see Katakana in Japanese most commonly used for writing

How did Katakana evolve?